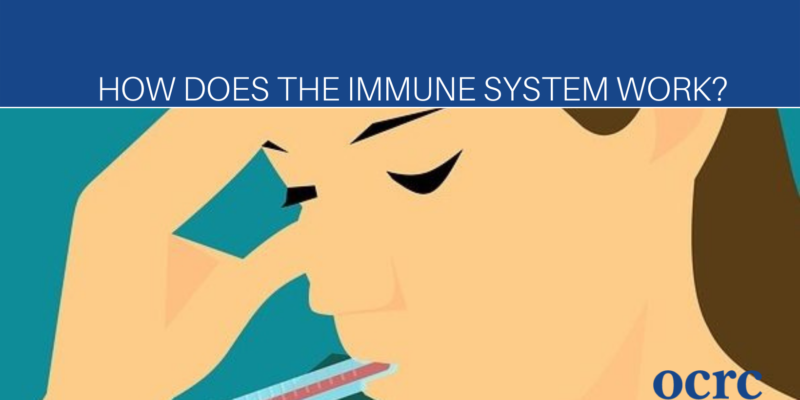 How Does the Immune System Work?

How Does the Immune System Work?

The immune system is the body’s natural defense against infections and illnesses—someone who is especially susceptible to sicknesses may have a weak immune system. Even someone with a strong immune system, however, can get sick when a germ or substance is especially aggressive, or if the immune system has never encountered the germ before. Take, for example, COVID-19, caused by a new strain of coronavirus which had not yet been detected in humans.

Sometimes, after contracting a virus (such as chickenpox), the body develops an immunity to it. Essentially, this is because when the body encounters a germ for the first time, the immune system activates to protect the body from harm. This response results in the creation of new immune system tools called antibodies and memory cells. The immune system will store information about the harmful substance. That way, if infection occurs again, the body can fight it more effectively and efficiently. The body fights off certain infections repeatedly, such as a cold or flu. This is because there are so many different strains of the virus that the body cannot develop an immunity to them all.

Sometimes, the immune system will mistake its own body’s cells for unknown, potentially dangerous germs or cells. When abnormalities like this happen, it begins attacking cells in the body that would otherwise be healthy. This abnormality is known as an autoimmune disease.

So, How Does the Immune System Work?

These germs or substances fought by the immune system are called antigens, which are any disease-causing bacteria, viruses, parasites, fungi or changes to the body (such as cancer).  When the immune system discovers an antigen in the body, it produces antibodies, which act as the defense against the invading antigen. The body will also produce memory cells specific to that particular antigen, so that any recurrence will be quickly fought off.

Parts of the Immune System

There are several organs, cells and tissues that work together to keep illness at bay. In addition to antibodies, the immune system contains:

The skin, lungs, and digestive tract also play roles in defending the body against illnesses. The different parts of the body are always working together to keep us as healthy as possible.

As news regarding the current viral pandemic continues to evolve, it’s essential to stay current on new developments. Centers for Disease Control and Prevention (CDC) and the World Health Organization (WHO) provide plenty of information about the disease, including prevention tactics, frequently asked questions, and even COVID-19 clinical trials.