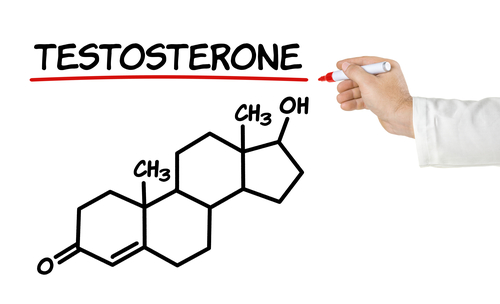 One in every six American men experiences low testosterone levels. The condition is so common that Low-T (as it’s abbreviated) affects approximately 13-15% of all American men. Most people who have not personally managed Low-T levels may be familiar with the hormone testosterone, but may not grasp the symptoms and prevalence of the condition. Read below to learn more about how this important hormone affects male and female physical development.

A hormone found in both genders, testosterone is present in much higher levels in men than women. As boys mature during puberty, the testicles produce increasingly more testosterone. Many physical changes accompany this time period, including deepening of the voice, the presence of facial and body hair and increased height and body mass.

What role does testosterone serve?

According to Healthline.com, “testosterone stimulates sperm production and a man’s sex drive and also helps build muscle and bone mass.” Testosterone is responsible for red blood cell production and fat distribution throughout the body. It is also a required hormone for the creation of babies.

Within the ovaries, women’s bodies produce a fraction of the amount of testosterone that men’s bodies need. Known as a sex hormone, this hormone affects bone mass, reproductive tissues, growth, and behavior.

What are the symptoms of Low-T?

After age 30, the male body slows down the production of the hormone and testosterone levels decrease every year thereafter. As levels continue to drop, men can experience fatigue, low sex drive and a decrease in muscle tone and mass.

Some of the physical changes associated with low testosterone are:

Additionally, certain conditions like testicular cancer, COPD, obesity, diabetes, HIV, kidney or liver disease, or drug addiction can exacerbate the symptoms of low testosterone. If low-T levels are present in a patient, doctors will monitor hormone levels via urine or blood tests throughout treatment.

Early detection of Low-T: Watch for these symptoms

A dramatic decrease in sexual desire or difficulty maintaining an erection can be signs of low-T. Per Healthline, “Testosterone alone doesn’t cause an erection, but it stimulates receptors in the brain to produce nitric oxide — a molecule that helps trigger an erection. When testosterone levels are too low, a man may have difficulty achieving an erection prior to sex or experience spontaneous erections (for example, during sleep).”

Sudden moodiness, a lack of mental concentration or excessive fatigue may be attributed to low-T levels. You may notice that you are constantly tired, even though you sleep the same number of hours every night. Perhaps focusing on your work is growing increasingly difficult. Be sure to keep in mind that hormone levels can be at fault for the abrupt changes in your motivation.

Certain symptoms can have a variety of root causes. Weight gain and hair loss can be wrongly attributed to stress, however, in men over 50, low-T is often the culprit. Additionally, low testosterone levels can cause specific fat distribution patterns. One such pattern is known as Gynecomastia, which involves swollen or enlarged breast tissue. While this is not usually a serious medical issue, it can be frustrating or unpleasant for the individual experiencing the condition.