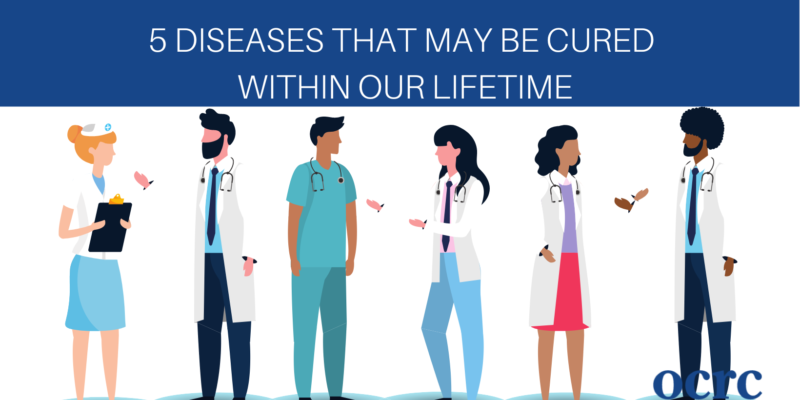 5 Diseases That May Be Cured Within Our Lifetime

5 Diseases That May Be Cured Within Our Lifetime

Thanks to clinical research and the dedicated efforts of medical professionals, many diseases have been eradicated over the last 100 years. Modern treatments exist for smallpox, polio and leprosy, and researchers have even developed therapies for previously fatal illnesses such as pneumonia.

Looking forward, we have many more scientific breakthroughs to keep an eye out for—keep reading to learn about five diseases that may be cured within our lifetime.

The Human Immunodeficiency Virus, or HIV, was only discovered mere decades ago. It can be contracted through sexual intercourse, through contact with infected blood, or even from a mother to her child. Once a person is infected with HIV, they will have the virus for life.

Researchers are working diligently to find a cure for this devastating disease, and continue to forge ahead with new studies. One possibility includes immune modulation, a drug or procedure which strengthens the immune system’s ability to fight the virus. Another strong possibility is gene therapy,which genetically alters the cells.

Unfortunately, there is still no known cure for the virus, but awareness and prevention methods have significantly improved since it was first discovered in 1983.

Alzheimer’s affects nearly 5.7 million Americans who struggle with varying stages of dementia. This degenerative brain disease involves progressive memory loss, making everyday life increasingly difficult. Because the underlying cause of Alzheimer’s are currently unknown, finding a complete cure is a ways down the road.

However, there have been significant developments in the treatment and prevention of Alzheimer’s Disease, with three drugs available to improve memory and delay the progression of the disease.

According to P. Murali Doraiswamy, head of biological psychiatry at Duke University, “future Alzheimer’s therapies will likely involve delaying the onset of the diseases rather than repairing it altogether.”

Cancer refers to the uncontrolled growth of abnormal cells in the body. This can affect almost any organ or tissue including lungs, breast, colon, skin and ovaries. Due to the complexity of the disease and the variety of forms it can take, developing a cure has proven difficult.

Current widely-used cancer treatments include chemotherapy and radiation therapy. Unfortunately, these are not always strong enough to completely eradicate the disease.

However, researchers are looking into replacements for chemotherapy and radiation (and have made significant strides doing so), especially before cancer cells become resistant to the current treatment methods.

Cystic Fibrosis is a hereditary disease brought on by a single faulty gene which causes mucus to be abnormally thick, thus preventing the lungs and pancreas from doing their jobs correctly.

After 25 years of research, there is sadly no known cure for cystic fibrosis. However, there are several current treatments available, depending on the severity of the disease and the organs affected. Medical professionals heavily rely on early diagnosis and long-term therapies, including mucus-thinning medications, antibiotics, bronchodilators and physiotherapy.

Another treatment possibility is gene therapy, which would specifically target the faulty gene causing the disease. In fact, in February 2018, the FDA approved Ivacaftor, which does just that. While it currenlty only works for 4% of cystic fibrosis patients, it is certainly a step in the right direction.

Heart disease, or atherosclerosis, is the buildup of cholesterol, fatty cells, and inflammatory deposits in the arteries—simply put, it is the “clogging” of arteries which then restricts blood flow.

Coronary heart disease is primarily treated and prevented by lowering cholesterol and blood pressure levels. Developments in research have even created mechanical devices to help the heart pump.

Because heart muscles and valves cannot be restored once damaged, heart disease is not currently curable. That said, stem cell studies to regenerate heart muscles have come a long way; and with continued medical research efforts, the future looks promising.