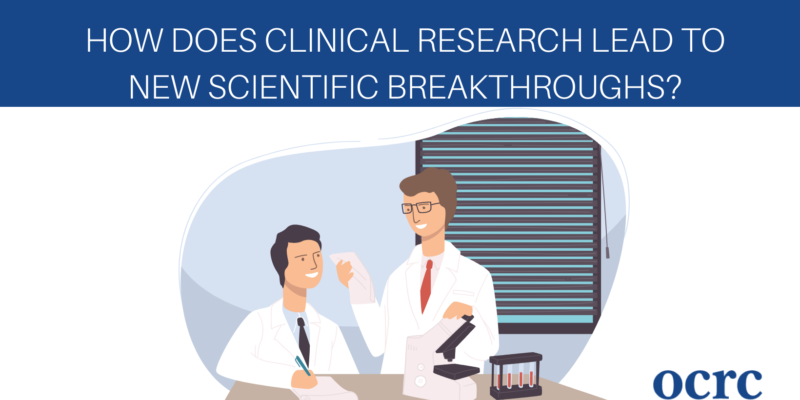 How Does Clinical Research Lead to New Scientific Breakthroughs?

How Does Clinical Research Lead to New Scientific Breakthroughs?

In the mid-1700s, physician James Lind conducted the first controlled clinical trial in order to find a cure for sailors suffering from scurvy. Through his research, he discovered that citrus fruits such as oranges and lemons were able to remedy the disease caused by Vitamin C deficiency.

In 1928, Alexander Fleming conducted a series of experiments involving common bacteria; an uncovered Petri dish became contaminated with mold, the “juice” of which he found to kill off harmful bacteria of several common diseases including scarlet fever and pneumonia. This “mold juice” would later be named penicillin. In the word of Fleming, “when I woke up… I certainly didn’t plan to revolutionize all medicine by discovering the world’s first antibiotic, or bacteria killer. But I suppose that is exactly what I did.” Little did Fleming know, his “mold juice” would save lives.

In 1955, after years of research, Dr. Jonas Salk announced his own major medical breakthrough—the discovery of a vaccine that could prevent polio. As recently as August 2017, there continue to be major developments in cancer research, with several new studies being conducted at this very moment.

These breakthroughs are only possible through the research done in clinical trials— in fact, there is a direct correlation between clinical trials and major medical breakthroughs. In addition to treating and preventing diseases and viruses, it’s also crucial that clinical researchers and principal investigators understand these diseases and keep them under control. Even with the advances of modern science and medicine, however, nothing quite beats the old-fashioned “trial and error” method.

How are new clinical trials chosen?

Clinical trials can be conducted on a priority basis. For example, a vaccine was urgently needed after the recent Zika outbreak. As of December 2017, several Phase I trials showed promising results.

Sponsors also play a role in the development of a clinical study. They may initiate, manage or finance a clinical trial, but will not conduct the study or collect research. A sponsor may be an institution where the trial is held, or a company/organization with a mission to support efforts within a specific area of research. Johnson & Johnson’s pharmaceutical products focus on the areas of immunology and infectious diseases, among others; in 2016, they sponsored 100 trials including a Phase III trial for an Ebola vaccine.

Clinical studies can also be chosen based on the patient population. According to Douglas Weckstein, MD, trials are often identified if they are believed to offer patients a promising chance of benefit, or if they will answer important questions that will improve patient care in the long run. The goal is essentially to offer treatment options to patients that they would not otherwise be able to obtain. Inclusion and exclusion criteria of the study is also a factor in determining any limitations within the participant population.

Several clinical studies are conducted as a way to continuously improve existing treatment methods and further understand the disease. Ongoing research and development methods have allowed HIV patients better qualities of life compared to just 25 years ago. According to the American Diabetes Association, one in three Americans will develop diabetes by the year 2050 if current rates continue. For this reason, researchers are continuously working to develop new treatment and prevention methods.

How Can I Participate in Clinical Trials?

ClinicalTrials.gov and CenterWatch.com provide listings for clinical trials which are recruiting participants. Additionally, your own doctor and/or community hospital may be involved in clinical trials. You can always contact us to inquire about current research volunteer opportunities.