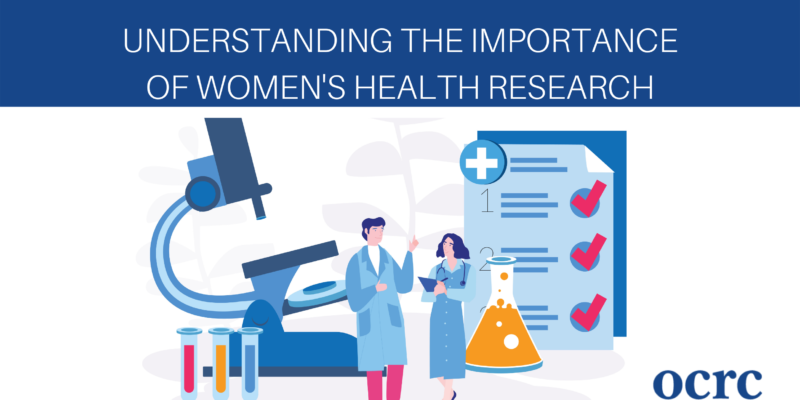 It’s a known fact that a healthy lifestyle is the key to a healthy life. A well-balanced diet, sufficient sleep and exercise, and regular doctor’s visits are all crucial for healthy living. However, a variety of other factors also influence your overall health and well-being. Socioeconomic status, genetics, sex and gender all play a role in health.

January is Cervical Health Awareness Month, calling attention to women’s health and encouraging women to schedule their regular doctor’s visits and screenings. As we emphasize the importance of women’s health, it’s important that we also understand the value and necessity of women’s health research. (After all, medications and treatments as they exist today would not be possible without the diligent clinical research trials continuously being conducted behind-the-scenes.)

Many people think of “women’s health” and “reproductive health” as somewhat synonymous concepts. While it’s true that some health conditions, such as breast cancer and gynecologic health issues, predominantly or solely affect women over men, there are plenty of health issues that affect both men and women in different ways.

Women’s health research is imperative to understand the impact that sex and gender have on various diseases and overall health. Both of these concepts—sex as a biological classification and gender as a socially constructed role—have an influence on one’s health.

Another example is heart disease. We tend to understand common heart attack symptoms as they appear in men, with the image of a man clutching his chest and falling to the ground. In women, however, a heart attack is often much less severe. Sometimes an attack is barely even noticeable, with symptoms including prolonged discomfort, dizziness, fatigue, and sweating.

While heart disease is a leading cause of death among men and women alike, women are often underrepresented in clinical trials relating to cardiovascular medications. In fact, one study on aspirin as a heart attack prevention method included 10,000 male participants and zero women.

Even with the significant health differences between men and women, health research did not adequately include women for years. Fortunately, this has changed. Researchers are continuing to make significant improvements when it comes to understanding and advocating for women’s health.

The History and Significance of Women’s Health Research

In previous decades, women were significantly underrepresented in clinical research. Perhaps this is because as primary caregivers, women were often not available to participate in clinical research trials. Perhaps it’s because researchers did not fully grasp the complex differences between genders, and female bodies were simply thought of as smaller versions of a male body.

Since then, there have been several improvements including:

As of 2015, the Office of Women’s Health had funded 340 research projects addressing various health issues in women throughout their lifespan, including (but certainly not limited to):

Of course, it doesn’t stop there. In fact, thanks to women’s health research, researchers have been able to identify the ways in which the COVID-19 pandemic has affected women differently than their male counterparts.

Any FDA-approved treatments and medications that we use today are the result of rigorous clinical research trials and testing. However, many existing treatments are based on research that did not include women.

This means that the differences in risk of disease, symptoms, diagnosis, and treatments (including responses to treatments and medications) were not always considerations. As a result, updated clinical studies with improved representation are in high demand.

In addition to conducting continued research on women’s health, it’s just as important that the results of the search are clear and readily available to women and their health care professionals in order to allow for informed decisions.

You can also keep an eye on our current studies for opportunities to get involved. Contact us to learn more about our clinical research center and how you may be able to take part in a clinical study.