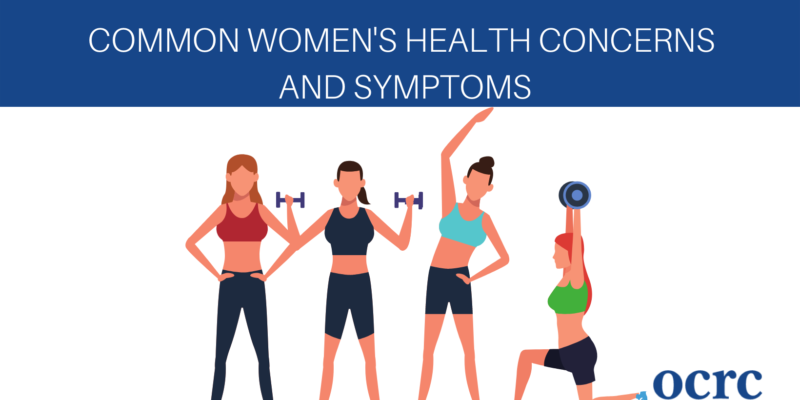 While a healthy diet and regular exercise are beneficial and can slow signs of aging, a healthy lifestyle doesn’t necessarily make anyone immune to disease. Additionally, certain health conditions predominantly affect one gender or the other. Keep reading to learn some common women’s health concerns.

Heart disease is the number one cause of death for both men and women in the United States. However, the symptoms can be quite different for women than they are for men. Many of us have a mental image of a man clutching his chest and falling to the ground during a heart attack; for women, a heart attack is not always as severe, or even noticeable. Symptoms include:

These symptoms often appear during a restful state more often than during physical activity. Because many women don’t recognize these symptoms as a heart attack (some even mistake it for the flu), heart disease can often go unnoticed.

Women of all ages should be aware of heart disease risk factors, including:

According to MedicalNewsToday.com, breast cancer is the most common invasive cancer in women, and the second most common cause of cancer-related death in women, following lung cancer. However, there have been great improvements since the 1980s—the American Cancer Society estimates that the chance of death due to breast cancer is approximately 1 in 38.

Common symptoms of breast cancer include:

Breast cancer is a complex disease, in that it’s unclear why some women develop it and others do not. However, researchers have identified several factors (hormonal, lifestyle, and environmental) that may increase the risk of breast cancer:

Whether you think you’re at risk or not, it’s important to regularly get screened for breast cancer, and to become familiar with your breasts and self-exam procedures, to better identify unusual signs and symptoms early on.

Gynecological cancer refers to any form of cancer that begins in the female reproductive organ. The most common of these cancers affecting women’s health include endometrial, ovarian, and cervical cancers.

One out of every 40 women develops endometrial cancer due to excessive estrogen production. Ovarian cancer, while less common, is more terminal—it is known as a “silent disease,” as the symptoms don’t usually show up until the cancer has already spread. Cervical cancer, which used to be the most common form of gynecological cancer, has been greatly reduced by the development of the pap test.

If you experience irregular bleeding (between periods, after sex, or after menopause), or frequent abdominal discomfort, talk to your doctor about getting screened for cancer.

Risk factors of gynecological cancers include:

Treatment often includes a hysterectomy (uterus removal), or less aggressive surgery for younger women to preserve fertility. The risk of developing one of these forms of cancer can be reduced by a history of pregnancy or taking birth control pills, as less ovulations can prevent ovarian cancer.

While these diagnoses may sometimes be out of an individual’s hands, anyone can always make choices to lead a healthier lifestyle overall. Check out one of our other blog posts: 5 Simple Ways to Improve Your Health in 2020.