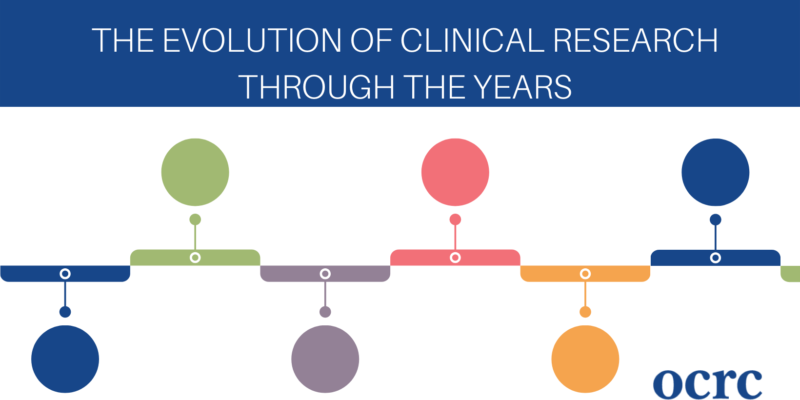 The Evolution of Clinical Research Through the Years

The Evolution of Clinical Research Through the Years

Every May, we recognize Clinical Trials Day—a celebration of the first controlled clinical trial conducted by James Lind in 1747. Through his research, Lind was able to find a much-needed remedy for sailors suffering from scurvy.

While Dr. Lind may be considered the first physician to have conducted a controlled clinical trial, the history of clinical trials actually dates back to long before his time.

Keep reading to learn about the fascinating history of clinical research before and beyond James Lind’s pivotal scurvy study.

Did you know that the world’s first clinical trial is recorded in the Bible? The Book of Daniel describes an experiment in which King Nebuchadnezzar ordered his people to consume a diet consisting purely of meat and wine. He falsely believed it would keep them in prime physical condition.

In his encyclopedic “Canon of Medicine,” Persian physician and philosopher Avicenna established some groundbreaking rules for testing drugs and remedies.

While there is no recorded evidence of these principles in practice, Avicenna’s approach is considered to be the first description of a formal clinical trial, as the fundamental nature of clinical research has changed surprisingly little since his time.

Surgeon Ambroise Paré conducted an accidental clinical trial—now considered the first clinical trial of a novel therapy—when he ran out of boiling oil, the conventional method for detoxifying and cauterizing wounds.

In its place, he used a mixture of egg yolks, rose oil, and turpentine. The next day, the wounded soldiers who received the new mixture were improving. He found they were healing much better than those who received the standard oil.

Naval surgeon James Lind famously conducted the first controlled clinical trial in order to find a remedy for a group of sailors suffering from scurvy.

He divided the 12 sick sailors into six pairs. Then, gave each a different dietary supplement such as cider, vinegar, seawater, sulfuric acid, oranges, and lemons.

Within a week, the sailors who received the oranges and lemons were able to recover. This resulted in clear evidence that citrus is a crucial part of any sailor’s diet.

The concept of a placebo was first mentioned in the early 1800s, defined in Hooper’s Medical Dictionary of 1811 as “any medicine adapted more to please than benefit the patient.”

Placebos have since been a crucial part of many “blind clinical trials,” working psychologically more than physiologically. In these studies, participants are not informed whether they have received the placebo or investigational drug.

A liquid form of Elixir Sulfanilamide, a strep throat treatment, was put on the market after showing positive results in tablet and powder form.

Studies were unfortunately overlooked before the new form of the drug became publicly available. The consequences were disastrous and the drug was responsible for the deaths of more than 100 people in 15 states.

This led to the 1938 implementation of the Federal Food, Drug, and Cosmetics Act, which still acts as the basis for FDA regulation to this day.

The Ongoing Advances of Clinical Research

Since James Lind’s scurvy trial and beyond, clinical trials have evolved into standardized procedures with strict regulatory and ethical requirements.

Clinical research continuously contributes to scientific and medical breakthroughs. For instance, take the rapid development of the life-saving COVID-19 vaccine, for example. It’s especially noteworthy that the rollout of these vaccines is the first time that an mRNA vaccine has been FDA-approved for use in any disease.

As researchers continue to make fascinating discoveries, it’s exciting to think about what the future holds. In fact, thanks to clinical research, scientists may find the cure for notably incurable diseases within our lifetime!

Interested in contributing to the groundbreaking research done in clinical trials? See if you qualify for one of our studies: https://ocrc.net/current-studies/